How to do Proxying During Development?

Following my recent discovery of Disqus’s underhand link hijacking, I’ve been redoubling my efforts to find an alternative to Disqus [long-standing thread --> here].

Anyway, after much wailing and gnashing of teeth, I’ve managed to setup Isso commenting on my server and import my old Disqus comments. So, now that it’s all working , it’s time to start ‘prettying’ it up a bit. 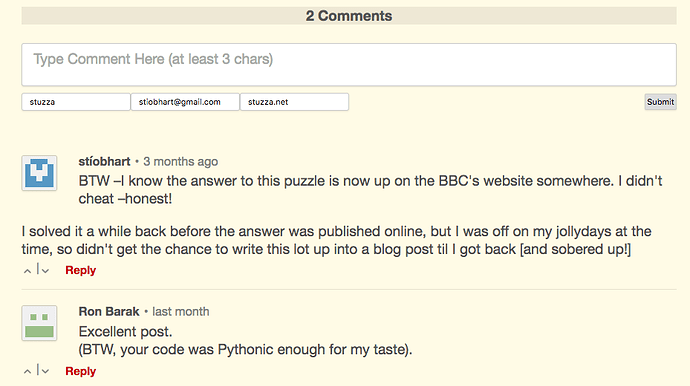 Trouble is, to do this on my local machine, I need to proxy requests to http://localhost.com:1313/isso to the Isso Python script and I can’t work out how to do this.

It would be great if I could somehow find a way to avail of Hugo server’s --watch feature to reflect these changes instantly, while at the same time, being able to proxy the Isso requests.

Anyone got any ideas on this?

I don’t think a proxy is what you want (and certainly not something that Hugo’s server supports).

Why not set up

Assuming there are some cross-domain restrictions that got you to start with this proxying in the first place.

… a proxy is … certainly not something that Hugo’s server supports.

Oh well. I didn’t think Hugo’s server would support proxying, but just thought I’d ask in case the magic coding pixies had hidden it as an undocumented feature.

Assuming there are some cross-domain restrictions that got you to start with this proxying in the first place.

Isso is a Python app. It generates the JS files which embed the comments dynamically. So although the Isso comments script for my site is at https://stiobhart.net/isso/js/embed.min.js that file does not actually exist amongst my site files.

Requests for anything under /isso need to be proxied to the Isso app & server running on some other port. Then, I’d assume Isso does the usual web app trick of internally routing those requests to a function which prints out that JS.

Actually, in writing this out, I think I might see a solution…

According to Isso’s developer, the reason Isso does it this way, is so that the embed.min.js file is automatically updated to the newest version, whenever you update Isso, without you having to change any of your static site files. So I’m thinking, I can probably just copy that generated JS to a dummy embed.min.js file residing at that location within my Hugo site setup. Then I’ll not need to do any proxying at all, as the file will actually exist there and so Hugo will be able to access it.

Of course I’ll need to remember to remove the embed.min.js file again, before uploading the site, as it’s not supposed to actually exist. But, in the meantime that should allow me to develop as normal in Hugo, with all the convenience of server --watch.

OK. This is slightly more complex than I thought. It’s easy enough to create a static JS file in my Hugo site at /static/isso/js/embed.min.js, which will cause the Isso interface to be displayed during development. Unfortunately it’s missing existing comments as these are also dynamically injected into the page by the Isso script.

I can easily copy a rendered block of comments from the live site and display it in the appropriate <div> so i can use these for styling with. But obviously I only want to display this [and include the hardcoded embed.min.js file if the site’s running on localhost.

So, why does this not work:

I suspect it’s because .SiteURL isn’t really a string. But can I cast it to a string?.. or is there some other way to detect if we’re running Hugo locally?

Ah. Found it in another thread:

I knew it’d turn out that .Site.BaseURL wasn’t really a string!