Unable to render an image

HI
I have made a new site using Hugo New as suggested in the tutorial. I have added a few pages, tags and categories. I am using the PaperMod theme and followed this tutorial.
I have a structure from the “new” site generation like this: 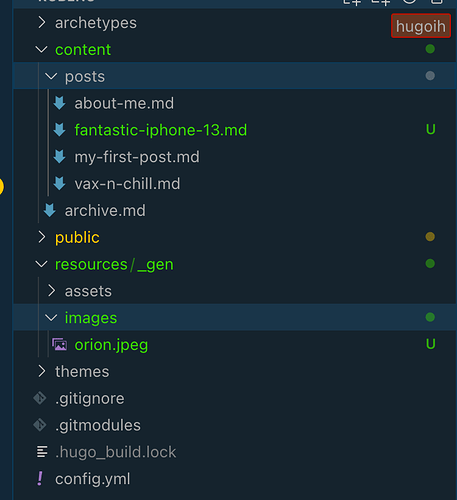 This is actually quite frustrating, that something so simple is so complicated?

You are looking at template examples.

Also you do not place anything manually under /resources/_gen/ as that is a directory that gets populated automatically by Hugo.

The Image Resource is an image that Hugo can process as a Resource. Hugo can find resources that reside either under a Page Bundle or under the assetDir which is called /assets/ by default.

Also here is a guide to Markdown Syntax that follows the CommonMark spec -that is used by Hugo’s Markdown processor-.

P.S. I amended the topic title. i understand the frustration, but there is no need to vent in this forum.

Hi
Thanks a lot for your answers and the links. I tend to use MD mostly for simple readme files and some wiki entries we do. I will check them out.
May I suggest:
The “hugo new my_web_site” should make both the /static, the /assets and the first dir for a post with an index.md file inside it? Maybe even with a test image.
Googeling this revealed that I was not alone not having a clear understanding of this and a first example would be highly helpfull for a lot of people.
Also It would be nice if you included the part about html templates in MD in the getting started. Most people probably just want to make a simple website (at first anyway) and that is about what they need to do that.
Regards!

For reference I opened the following issue:

A request came up in the forum: https://discourse.gohugo.io/t/unable-to-render-a…n-image/36993/3 >The “hugo new my_web_site” should make both the /static, the /assets and the first dir for a post with an index.md file inside it? Maybe even with a test image. Currently the `/assets/` directory does not get generated when the `hugo new site` command is executed. Also perhaps a skeleton content structure should be generated, so that new users have a tangible example of Page Bundles, maybe something like: ``` └── content | └── _index.md └── posts └── _index.md └── test └── index.md └── placeholder.jpg ```

Try these 2 sites really helped me in learning Hugo