I am closing this topic because I have already asked you to follow the [Requesting Help]guidelines and.

A description of the problem along with screenshots is not enough -as you ought to know and as has already been posted countless times in this forum-.

If you plan on participating in this forum you must follow the forum rules and not waste moderator time.

When a forum moderator asks a user for the source code of a project it is expected to do so.

Not assigning or removing the Support category that a moderator has assigned from a topic does not mean that a user is able to evade forum rules about requesting help.
Social share buttons not being shown on deploy

I posted a question that was removed that contained the theme source code along with a image of the contained div that had issues, so what the hell are you talking about? Did you even read the post or were you just itching to close the question because you need your superiority complex met? 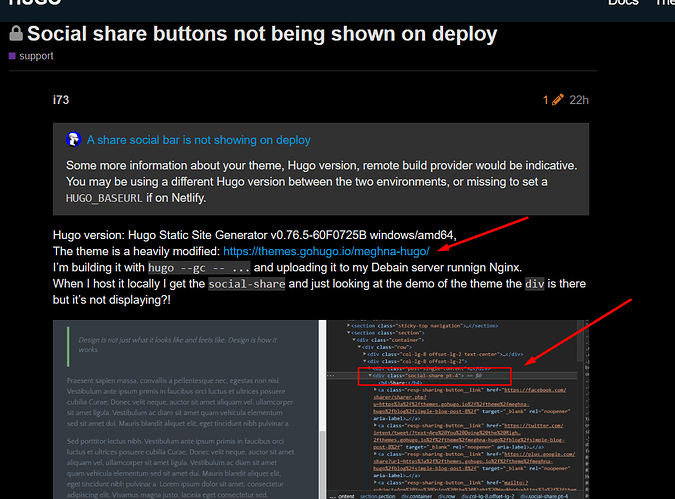 I suggest the @moderators actually look at how this guy is acting since I read the guidelines and he’s just abusing power now acting condescending and patronizing, even when I “Follow his rules” it’s not enough for him.
I won’t be back to these forms.

When a forum moderator asks a user for the source code of a project it is expected to do so.

You’re a joke man, and get a life.

Edit since the threads locked @pointyfar:
I’m not going to post my entire repo publicly and to even suggest that I do that is actually ridiculous.

When I host it locally I get the social-share and just looking at the demo of the theme the div is there but it’s not displaying?!

This means that the demo has the same issue and showed the div class, so I really don’t know what more you want from me. Open the dam source that I linked and look through it if you need it so bad, is that hard? What exactly is the issue you’re having with that?!

There’s no misunderstanding, the only one not understanding is you guys. The source code is literally there with the line and class, you seemly can’t read.

You guys need to learn to grow up a little and stop acting like a small discretion (Even when I follow the rules) is a bannable issue (Yes I was banned for that post).

You’re a joke man, and get a life.

I don’t think using that kind of language helps with this debate.

That said, thanks for your input. I think it helps to understand that moderation of an internet forum is an ungrateful and unpaid job, and I and others may be a little quick to respons sometimes.

I have not looked into your thread, but I have been thinking some times that we are a little quick about asking for the “site code” – when the post itself have enough examples and is showing clearly what the problem is. But then again, what is obvious to me (who have spent way to many hours with the Hugo internals) may not be obvious to others.

But thanks again for your input, we will take this into consideration.

The theme is a heavily modified: https://themes.gohugo.io/meghna-hugo/

We have no idea how you modified this theme. We cannot possibly guess what these modifications are. Maybe you added CSS display: none. Maybe you got some JS magic. Based on the limited information you provide, it seems the HTML code for that div does get generated, so I can only guess that it’s probably a CSS/JS/whatever going on.

We are not asking for your site code just for funsies. If you had taken the time to read the Requesting Help guidelines you would have seen this section:

Let us see your code

Include a link to the source code repository of your project, because we really need the context of seeing your templates and partials to be able to help you. It is trivial to do a quick git clone on your repo, then run hugo server in your project, to help you out. On the other hand, recreating your code from screenshots, or sort of guessing at it, is not.

If you can’t share your repository for whatever reason, consider creating a dummy repo that you can share, which reproduces the problem you’re experiencing.

Good luck with whatever issues you are having. You are welcome to ask your question again once you have read, understood, and complied with the Requesting Help guidelines.