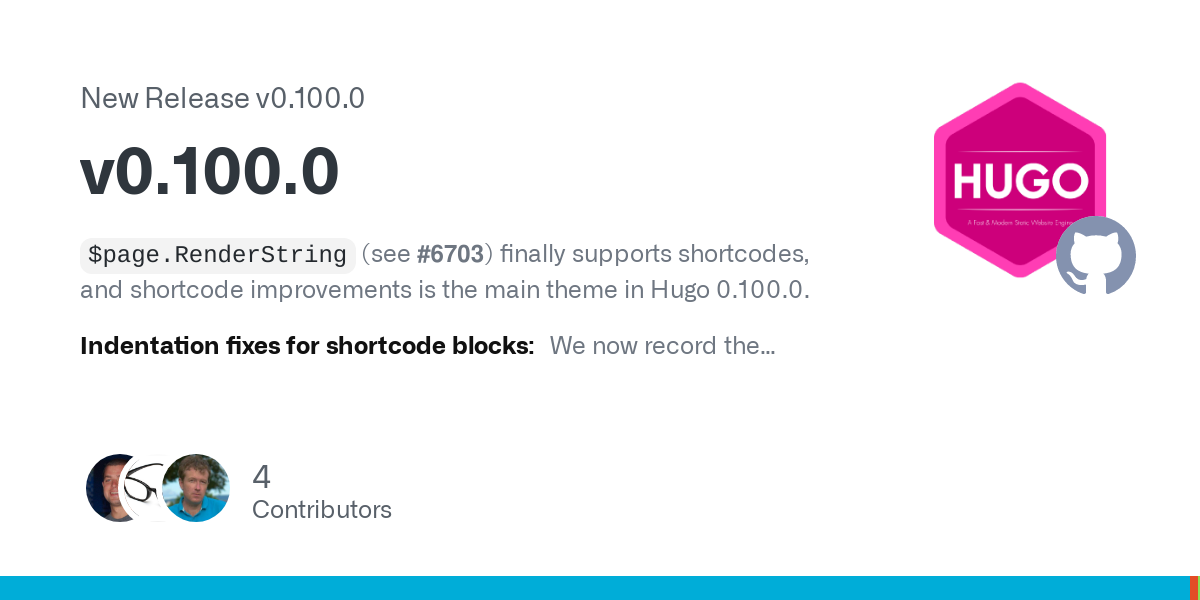 This is a good one.

Ask functional questions somewhere else … this is a meta thread about the release.

I’ll ask the inevitable question so others won’t have to do it: does going to a version 0.1xx scheme have any connection to whether/when Hugo will reach version 1.x territory?

It seams that development till version 1.00 going slowly and than suddenly changes from 1.00 to 100.00 going like crazy… hence good we goes into 0.100

does going to a version 0.1xx scheme have any connection to whether/when Hugo will reach version 1.x territory?

Docker Image - klakegg/hugo - Other Hugo Docker image - not yet updated

Debian (sid) - not yet updated

I like that you compare the Hugo project with Apple, but we’re a little bit smaller…

The one thing we signal by not going 1.x is that we’re kind of not “1.0 feature complete”. People tend to think a major version would get a more stable version, which I’m not sure is always the case. I suspect you end up with major version increments and, due to lack of human resources, not so much backports of bugfixes to the previous version(s).

When I worked on removing some old outdated posts on my website I noticed that I wrote in the past about Firefox version 3.5.

From my observation, after passing 1.00 “some” developers seams to skip quickly between versions… that suddenly, after a short period of time we dealing with a three-digit version.

I hope that guys from 11ty will not go this route

after a short period of time we dealing with a three-digit version.

I am more referring to the abnormal quick jumping from the full number of versions in some software development after going into 1.0 version.

Hugo going quite linear compared to this - Safari versions to Chrome for example.

I like that you compare the Hugo project with Apple, but we’re a little bit smaller…

If we looking at version changes in Apple software, Hugo is a good compare

If we looking at version changes in Apple software, Hugo is a good compare

For Apple there is obviously also a vanity and marketing aspect to it, too. OS X 12 has a better ring to it than OSX v1.2.0.

Love to see Blackfriday ripped out. My favorite part of coding is getting to remove the cruft.

Not to derail or anything … in World of Warcraft they quietly used their versions as a way to internally mark expansions.

After that 4th expansion they stopped doing it. Maybe because players were arguing about it endlessly (vanity vs coincidence) in the forums (gaining hundreds of replies; if closed, someone will open a new one); or there was a change in the lead dev.

SemVer is a good idea but doesn’t mean vanity, marketing, or internal meanings can not be added on top of it.

And one thing is clear, major version is definitely for major versions, vanity or otherwise, I think everyone agrees on that.