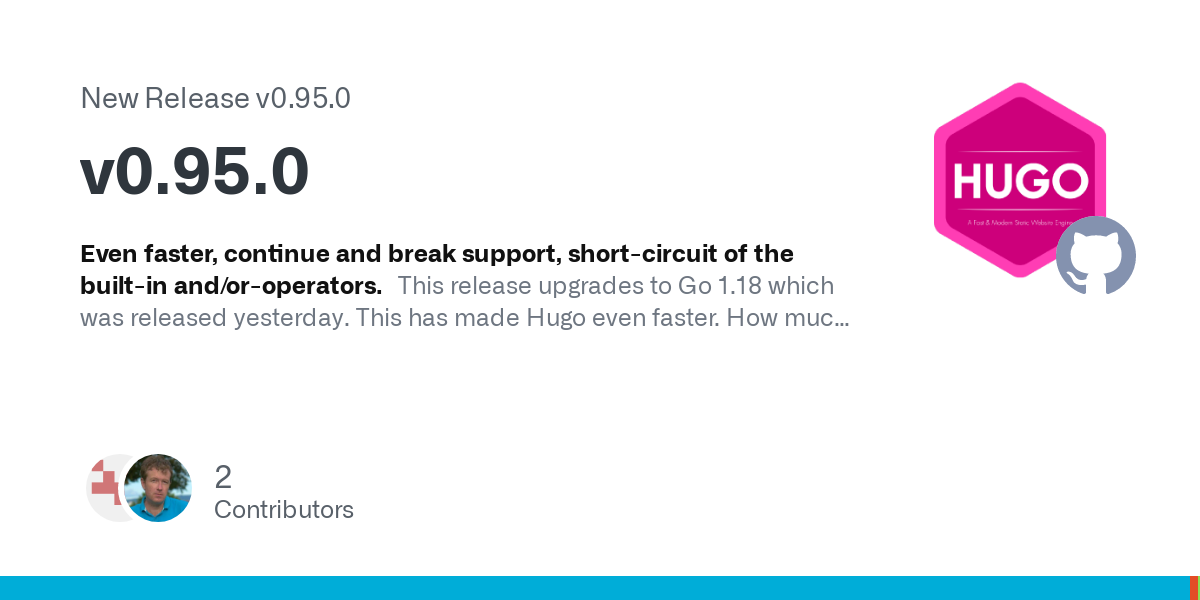 Now even faster, continue and break support, short-circuit of the built-in and/or-operators. This release upgrades to Go 1.18 which was released yesterday. This has made Hugo even faster. How much ...

break and continue will make rendering a specific set of content files within a range simpler!

I’m still having trouble keeping up with Hugo’s new releases.

There have been several revisions in the last two weeks.

Is this how it’s always been? It appears that a relatively small team has made significant progress.

I’m still having trouble keeping up with Hugo’s new releases.

I am not complaining!

This project is really amazing for people who want to get the latest and greatest features. The beauty of hugo static binary is that you are not forced to update unless you want the new features or need a bug fix.

Is this how it’s always been?

I think it mainly depends on the free time @bep gets to add features to this project, and then PR activity from other users or dependent modules (like goldmark, chroma, etc.). But yeah, this project has been super-lively at least for the past 5 years or so since I started using Hugo.

It appears that a relatively small team has made significant progress.

Personally I have started taking notes of big features that matter to me:

I did a quick summary about these new features. I think it’s very nice to have those in our toolsets. They sound small, but for me they are the biggest new features in quite some time

There is an issue open about a problem with spaces in the break and continue keywords. For now keep using {{break}} and {{continue}} if you encounter errors.

Note that the above is not an issue in Hugo.

It’s worth noting that in both of the upstream Go issues (for break/continue and and/or) it was Russ Cox, the leader of the Go project, who stepped up to the plate and implemented it himself. He is considered to one of the sharpest brains in Google. He had a summer job at Google back when he was a student at Harvard. He worked with Jeff Dean, a Google legend; and that summer he implemented Google Code Search:

AFAIK, Google Code Search was written by Russ Cox, who also wrote this: <a href="http://swtch.com/~rsc/regexp/regexp1.html" rel="nofollow">http://swtch.com/~rsc/regexp/regexp1.html</a><p>My guess, back when I was doing code search at Apple, was that he was actually scanning all the docs with his fast regexp, which would be do-able with the number of machines at his disposal + the expected...