Trying to help bring this up if it’s a bug. I really appreciate @moorereason’s work to improve metrics and everyone’s work on making Hugo better.

Is anyone else seeing this? If so I can open an issue.

When did this started?

On v0.92.2+extended darwin/arm64 (via MacPorts) partials only show up once.

Also, I was thinking of trying to update the docs for the new feature but wasn’t confident on defining the terms: Build Performance | Hugo

I am unable to reproduce this with v0.93.1-E9669FED+extended linux/amd64. I’ve tried calling the partial from multiple templates, with and without the extension, on a multilingual site, using multiple output formats, etc.

Can you provide a minimal example to reproduce the problem?

I’m able to reproduce it from this barebones repo. To borrow from @n1xx1, this repo from issue #9588 shows a duplicate: GitHub - n1xx1/hugo-0.93.0-deadlock-repro 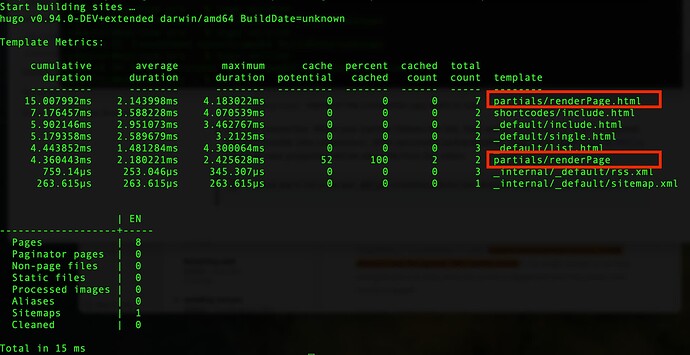 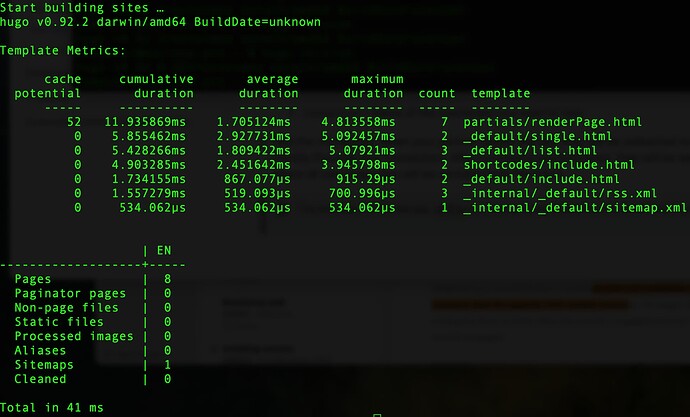 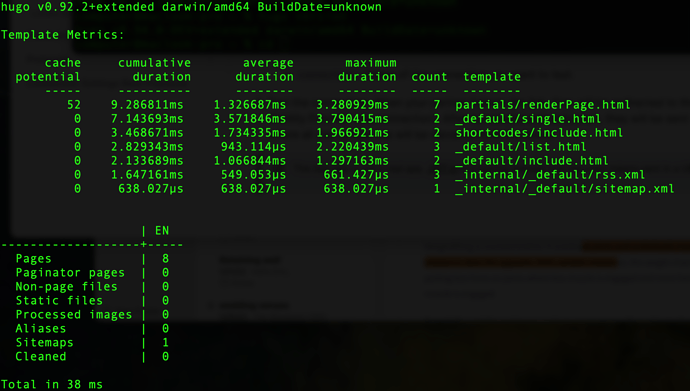 Thanks for the repo; that had the piece I was missing.

and these calls within baseof.html:

this is the final column in the console output:

When calling the partial function, duplicate entries are not created regardless of whether or not you specify the template’s extension when making the call.

The problem is limited to the partialCached function, and only occurs when you are inconsistent when specifying the template name.

When the extension isn’t specified we fallback to .html. Perhaps, with partialCached, we’re capturing the template name before the fallback has occurred.

The fallback to .html allows us to be a bit lazy. Instead, as a best practice, we should provide a fully qualified name.

EDIT: As I think more about this, I wish the partial function did the same thing so that I would know when I’m being lazy.

We pretty much exclusively use partialCached so it didn’t occur to me that partial is handled differently.

Also, for what it’s worth. in the test repo there isn’t inconsistent usage when specifying the template name but it’s still happening.

This post from 2017 suggests that not including the extension with any partial call is incorrect:

Note that from Hugo 0.20 the suffix will start to make some difference, but we will still append and look for partials with *.html to avoid breakage.

Thanks in advance! I’m betting every larger Hugo site relies on partialCached and --templateMetrics so hopefully your efforts also help many other users/sites!

does this mean that … templateMetrics reporting considers them separately or that it’s not caching properly?

I do not know the answer to that. Maybe the cache key is derived from the first argument to the partialCached function, instead of the filename to which it resolves. Perhaps @bep or @moorereason can provide a definitive answer.

in the test repo there isn’t inconsistent usage

I see that now.

The first call is simple:

The other calls are not simple, for example:

There’s nothing wrong with this (other than not specifying a fully qualified file name), but I wonder if different “pipelines” handle things differently.

Is it a requirement to include the extension when using partial and partialCached ?

I would like to say “Yes” but eliminating the fallback would break a lot of sites.

Another good reason to include the extension is to avoid collisions with partials that are defined inline (i.e., within another partial), presuming the inline partial definition does not include an extension. The partial namespace is global; you can access an inline partial from anywhere.

If I’m working on the docs and I see an example where the extension isn’t included, I usually change it, but it doesn’t always get my attention.

Create an issue and we (or I) will fix it.

I have added a comment as well, as I was unaware that best practice was to use .html and in fact (don’t remember why) thought that it was preferred to omit the the .html for partial calls and would like to see the non-best practice WARN or something obvious like that.