How to customise watch files list for hugo server to include dots files . during server mode (content development) while not compiling it as an output file in production mode?

I had successfully developed a Go-compatible string processing Hugo theme. At the moment, to use this module effectively, one has to write in a .content.html instead of the conventional _index.html. Hugo server does not watch any changes for dot files.

Current workaround is to manually nudge (e.g. write emptily in vim) the _index.html in a separate terminal when I want to render the site during development.

I attempted --poll argument but no avail.

For the reason why not to use _index.html:

If you can change this to _content.html you could do this in your site configuration:

The file watcher still detects changes[1] to those excluded files, but they are not transferred to public/ when you build the site.

If you can change this to _content.html you could do this in your site configuration:

If you exclude the files, you will exclude them from existence for both server-mode and compilation-mode, thus even with my parser, it couldn’t find the file on the virtual FS.

Do you have any problem with using _content.html instead of .content.html?

Do you have any problem with using _content.html instead of .content.html

No problem. I tried a bunch of regex glob with your idea.

The new ‘problem’ is with the excludeFiles. The moment I activate it, all the excluded files did not appear on both server-mode and compilations where the new source file _content.html went missing → nothing left to read.

Judging by the design, I believe this is working as expected at least in UNIX context (mount to override).

Then as a final step in the build can’t you just remove all those files from public?

Then as a final step in the build can’t you just remove all those files from public?

Not scalable in distribution. I’m building a theme module for Hugo, not a specific website repository.

Between guiding user to nudge the _index.html versus distributing a bash+shell script, the former makes a lot more sense.

guiding user to nudge the _index.html

Then I guess you have your answer!

Noted. In that case, dated to this post, there isn’t a solution to customise the watch files list without hacking some external workarounds.

Per bep’s comments in the closed issue, you can do this in site config:

Works on server mode but now failed on compilation mode. I tested the above in config/_default/config.toml file.

I’m not sure why the _build’s render field is not picked up mainly caused by the specific config toml files implementations (Ref: Hestia/docs/config/_default at experimental · ZORALab/Hestia · GitHub) or otherwise.

I found the necessary documentations, might take some time to figure out how things work. =(

Question: am I also expected to add front-matter in all the data files?

This will let Hugo track all the underlying data files during development while not building it into output files in compilation. 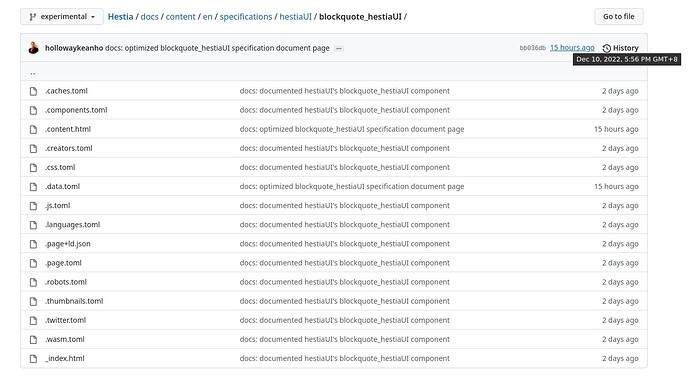