When I set title on a document, it uses that as the first H1 in the page, which is fine. I can adopt the pattern of only using second level headings and beyond in my markdown.

But the table of contents generated for me doesn’t include the first H1, which makes the TOC look off. 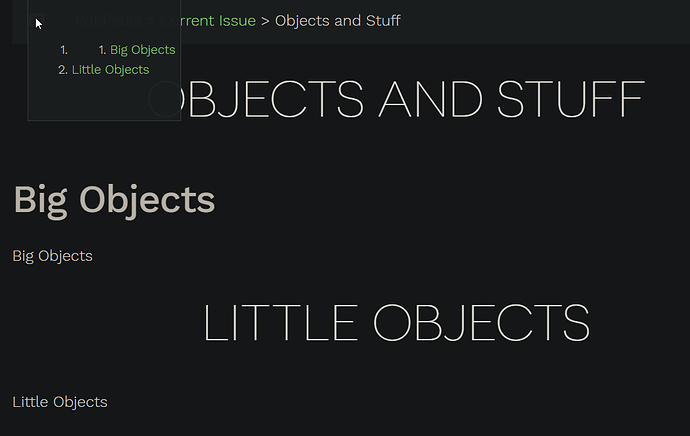 It looks like the generated TOC isn’t taking into account the front matter title, but if I go ahead and ad my own first level title, it screws up the look of the page because I get two H1s in the HTML.

Am I missing something?

I think you using your headings wrong

You got title which is H1 than you got big objects that is H2 and little which is again H1 you shall only have one H1 on your page.

TOC is picking H2-H6 as title is reserved to H1 Google Explains How to Use Headings for SEO

Thanks Idarek - I fixed up my markdown below to better show the issue I am describing.

TOC is picking H2-H6 as title is reserved to H1

The TOC does pick up H1s though!

I hope that better describes what I am trying to fix. I don’t mind either approach: writing my own level 1 headings or letting Hugo pick title and make a H1 out of it. I don’t mind if I need to put to some custom work to fix either situation. But I am also interested in what the “Hugo best practice” is, if I can do that.

You need to look specifically how theme is working as it may different approach to TOC but still, remember to avoid H1 in content.

Is this with the latest version of the Learn theme? In the past they fixed issues regarding toc indention.

Or try out my fork

Basically it doesn’t make sense to print out the h1 in the toc as it should the only h1 in the whole document and so would only add up to the nesting without any gain.

I found the solution. You can use markup configuration to tell the whole Hugo site start and end level for the TOC.

I add this to my config.toml:

And now the TOC will not render an entry for the H1/level 1 header.

Next I am going to figure out which option I like more:

I think I like the second option better, because then my markdown documents will make more sense outside of Hugo.

Consider always Title of a page as H1 for SEO aspect.