I have an issue setting environment variables on compile if the parameter name has an underscore in it.
I’m trying to set the variable called api_key under a section called map in a config file called params.toml. I have verified that I can set another parameter called zoom under the same section with the following command:

But trying the same with api_key fails. I’m guessing it’s to do with the underscore in the parameter name. I’ve tried to wrap api_key in brackets, single and double quotation marks and I’ve tried to escape the underscore api\_key. Nothing works. Anyone knows how to do this?

This appears to be a limitation imposed by viper.

But, this overrides everything under MAP, not just api_key. So, if your config.toml looks like this:

The value of foo will be nil. To avoid this you would have to set both:

I see. Your workaround works for me. Thank you:)

Okay! Was a little fast.

Your method does indeed inject the correct parameters into the configuration. If I look at the config after injection using the following command

I do get map[engine:1 api_key:12345 zoom:15], but for some reason the map breaks if I compile using hugo server or hugo. The map is completely gone, frame and all. The space for the map is still allocated in the html, but it’s just blank.

At a minimum, you must define an empty params.map in config.toml.

I added a similar test post to my site and it looks like the parameter does indeed work. 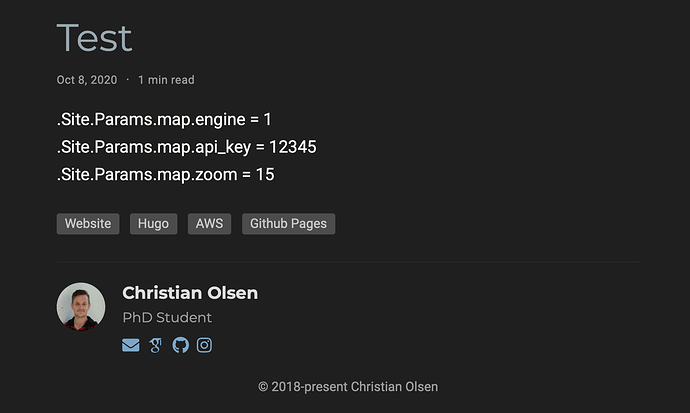 So that part works:) Now, these three parameters define a embedded google map, which doesn’t show up when I inject the parameters. It must be a problem with the theme I use (Wowchemy) I guess. But it’s just strange that this parameter injection into the configuration changes something outside the config file! 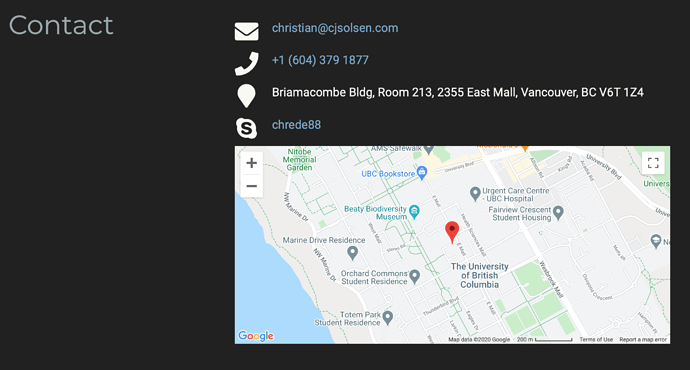 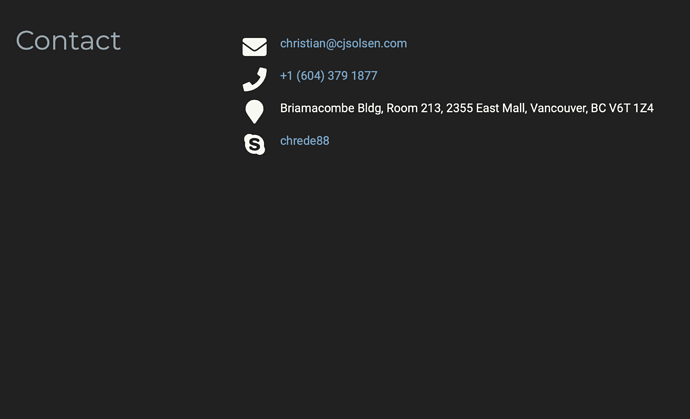 These three parameters already exist in the configuration, so it’s not like I’m creating new parameters.

You are injecting three strings. I think you want to inject one string and two integers.

With this, map.engine and map.zoom will be float64. When you set them in params.toml, the type is int64, so this may not work. You might have to cast them to int within the theme.

Stupid question, but how would I go about recasting to int64? standard go would just be to call {{ int64() }}, but that doesn’t work. Or maybe I’m doing it wrong.

First, have you tested to see if leaving the values as float64 works?

It might! Recasting into int, doesn’t work. But I don’t think that’s the problem. I’ll investigate further and return.

I’ve been digging further and found that a lot of the Java Scripts needed for my site aren’t loaded when I inject parameters in the configuration. I’ll be honest, I have no idea why only a subset of the defined JS would ever be loaded, or what could coarse it.

I’ve attached a screen dump from the JS console: 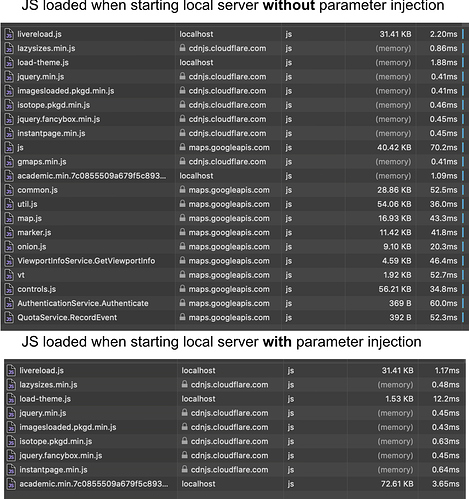 Please post a link to the public repository for your project.

The free website builder for Hugo. Create a beautifully simple site in under 10 minutes from Markdown, RStudio, or Jupyter.

This is not what I asked for.

An equality comparison between the two types will always be false. For example:

To fix this, change the comparison to:

You might wish to raise an issue here:
https://github.com/wowchemy/wowchemy-hugo-modules/issues

Your fix totally did the job.

I was testing the int64 vs float64 here:

Somehow it’s not an issue here. Leaving it as is, still works after fixing the if statement in site_js.thml.

I’ll raise an issue for a fix. Other people will have the same problem is they configure the search engine.

I can’t thank you enough for all your great help