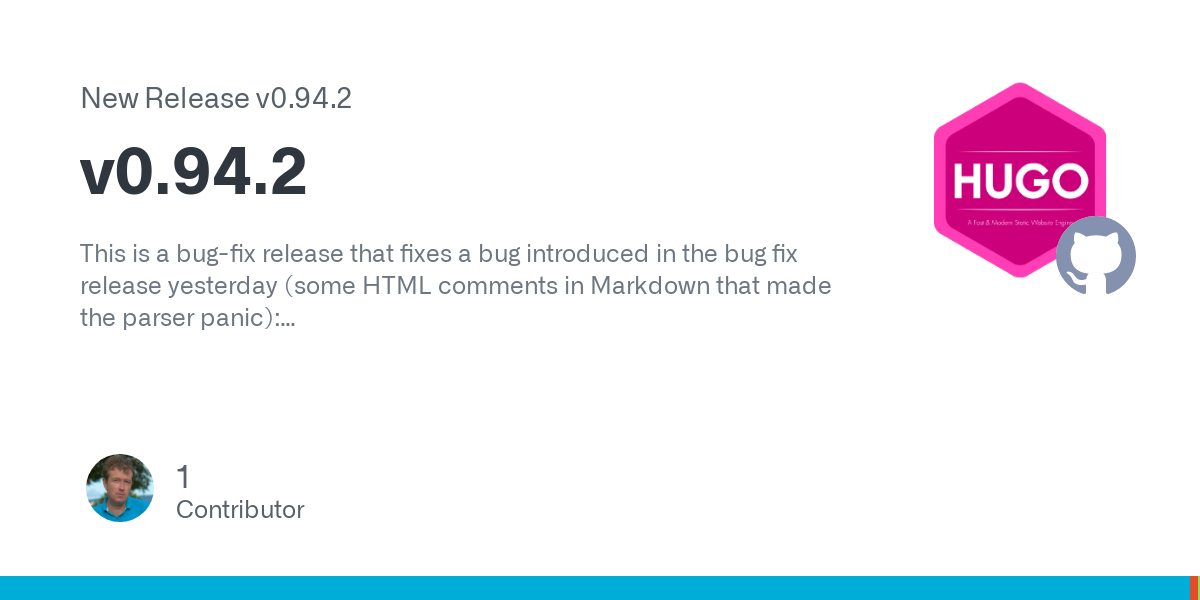 This is a bug-fix release that fixes a bug introduced in the bug fix release yesterday (some HTML comments in Markdown that made the parser panic): deps: Update github.com/yuin/goldmark v1.4.9 => ...

Hi @bep Should I expect brew release today or Monday? thanks

You should expect them when you see a PR on homebrew and then a merge. Bep doesn’t have any control over that. It’s 3rd party.

As soon as people can get PRs, and then reviews, the sooner it will be available.

nice to know I thought he needs to approve these packages before push.

Hey, @bep you supposed to have a… weekend?

Hey, @bep you supposed to have a… weekend?

I have a pretty flexible work life. I went skiing before lunch Wednesday, Thursday and Friday last week. Downhill/alpine skiing, record levels of snow in Norway this year (like 2-3 meters above 1000 meters).

And Sunday and Monday…

It appears the --renderStaticToDisc disappeared in the Linux/Ubuntu 0.94.2?

Are you saying that feature was added and then removed in a patch release? Not sure if that shouldn’t be a minor version increase instead

I see. Nice move. Fighting me with my own opinions

Now how about a note “Hey, --renderStaticToDisc stopped working in this release” in the zero.94.1 release notes

I know, don’t answer… But it’s kind of a great feature once it’s working (again)…

Now how about a note “Hey, --renderStaticToDisc stopped working in this release” in the zero.94.1 release notes

So, in my semver world, patch releases are meant for regressions introduced in the previous minor/major release. A new feature that doesn’t work is obviously fitting into this definition.

Sorry, but that is a wrong world… once it’s 1.something.something. For now it’s ok. FIXING regressions would be a patch release. REMOVING features is a minor or major change.

But let’s not discuss this. Fix it

FIXING regressions would be a patch release. REMOVING features is a minor or major change.

Removing a feature that doesn’t work is also fixing a regression.